Oil prices reversed course to fall about 1 percent after Trump criticized OPEC for output reductions that have helped raise oil prices and said the action would not be tolerated.

The energy index fell 0.89 percent, leading the losers among the 11 major S&P sectors.

Oil majors Exxon and Chevron were off about 1 percent and weighed on the Dow Jones Industrial Average.

The Dow, however, got a boost from General Electric, which jumped 4.5 percent after it posted quarterly results that topped estimates and affirmed its 2018 forecasts.

First-quarter profit at S&P 500 companies are expected to have recorded their strongest gain in seven years. Of the 73 companies that have reported through Thursday, 76.7 percent have topped profit expectations, according to Thomson Reuters I/B/E/S.

Investors are questioning if the tax cuts are going to be as beneficial as expected and are worried rising interest rates would hit borrowing costs, said Andre Bakhos, managing director at New Vines Capital LLC in Bernardsville, New Jersey.

“There are some lingering concerns around interest rates, and earnings, although so far are very robust, the forward-looking statements aren’t as exciting,” Bakhos said. 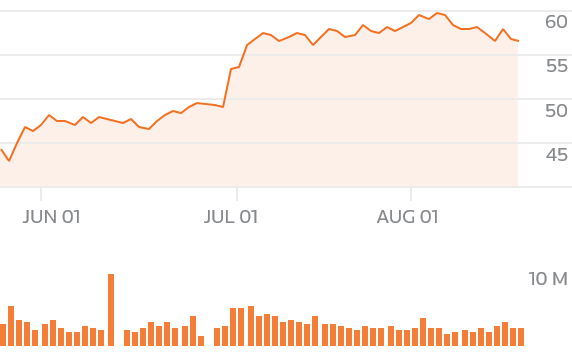 Bank stocks got a boost with U.S. ten-year Treasury yields US10YT=RR, the benchmark for global borrowing costs, hitting a near two-month high of 2.9410 percent.

Technology stocks .SPLRCT were weak for the third session in a row, dropping 0.89 percent. The biggest drag was Apple, which fell 3.2 percent.

One bright spot in tech was Twitter, whose shares rose 3.7 percent after bullish brokerage actions, including MKM Partners’ upgrade to “buy”.