Fresh worries about rising costs and inflation face U.S. stock investors looking toward the coming week and the next leg of the first-quarter earnings period.

In the latest week, the busiest for first-quarter reports, several companies warned about or cited higher costs.

Caterpillar said it was worried about higher prices for steel it needs for manufacturing. Alphabet said margins were squeezed by rising costs related to marketing and acquiring streaming rights for YouTube’s new TV service, while Procter & Gamble cited higher commodities and transportation costs.

Shares of all three companies declined even though their quarterly earnings were mostly strong.

Investors will be alert for more signs of rising costs next week, which brings results from several big consumer names like Kellogg and market-cap leader Apple. Also on tap will be a Federal Reserve meeting, the April jobs report and data on wages and inflation.

The first quarter was the first reporting period since U.S. President Donald Trump in March imposed a duty on imports of steel and aluminum. Prices for those and other commodities have risen sharply, with U.S. crude oil CLc1 up 7.5 percent in the first quarter.

“The wind was at the backs of these companies for a long time. Now it’s sort of turned. Input costs are up for most people,” said Rick Meckler, president of investment firm LibertyView Capital Management in Jersey City, New Jersey.

“How are companies able to handle that, and what are they able to do to offset it? Those are the kinds of things investors will look at.”

Higher input costs squeeze profits for companies. Compounding these worries, the yield on 10-year U.S. Treasuries, a benchmark for rates, this week hit 3 percent for the first time in more than four years, requiring more cash to service company debt.

To be sure, estimated S&P 500 profit growth for the first quarter has risen since the start of the reporting period and is now on track to rise 24.6 percent, the strongest year-over-year growth since the fourth quarter of 2010, according to Thomson Reuters data. That is thanks largely to changes in the U.S. tax law that slashed the corporate tax rate to 21 percent from 35 percent.

Some companies have had surprisingly strong results, like Facebook, whose stock jumped 9.1 percent and helped support a rally in the market Thursday after its results.

“Worries around corporate earnings are to what degree you’re starting to see those input costs chip away at margins,” said Mark Luschini, chief investment strategist at Janney Montgomery Scott in Philadelphia. So far, “earnings growth is being produced by well above-trend levels of revenue.” S&P quarterly revenue growth is forecast at 8.1 percent.

But if cost and inflation worries undermine investor sentiment further, it could throw another obstacle in the U.S. stock market’s attempt to reclaim record highs.

The S&P 500 is flat since April 13, when JPMorgan Chase kicked off the earnings season, and the index is down about 7 percent from its Jan. 26 record high.

Among other consumer names expected to report next week are Clorox and Kraft Heinz.

The consumer staples sector has the second-weakest estimated profit growth after real estate for the quarter, at 12.1 percent, based on Thomson Reuters data.

A government report Friday said U.S. labor costs increased more than expected in the first quarter, and wages and salaries recorded their biggest gain since 2007. This may draw attention to average hourly earnings and other data in next Friday’s U.S. jobs report. 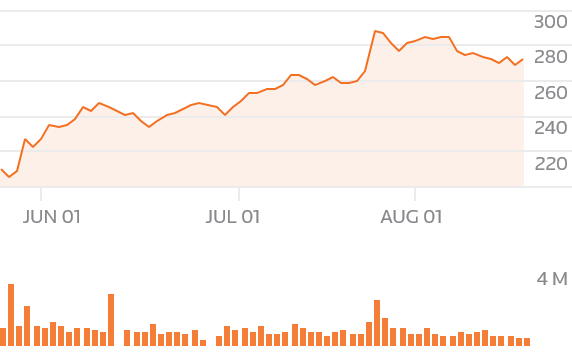